In the first quarter of the commercial vehicle market, heavy trucks soared and passenger cars drastically dropped.
So, how to develop a relatively stable European-wide wide-body light passenger market?
The answer is: slipping more than 7%.
A 7% decline in the market is not optimistic in the first quarter
The first commercial vehicle network recently learned that in February this year, the domestic European light passenger vehicle market sold 7194 vehicles, an increase of 22.2% year-on-year. However, due to a large drop in January, the cumulative sales volume of the European light passenger market in January-February was 15,778, a year-on-year decrease of 7.4%. It is expected that the downward trend will continue in March.
The weakening of the European light passenger market in the first quarter was related to several factors.
Jan.-Feb. 2017 Sales of European Light Passenger Brands
The first is that the Spring Festival is relatively early this year. Therefore, in January, the main buyers of European light passengers, small and medium-sized homeowners, all went home for the New Year. Naturally, the demand for such vehicles was relatively low, which led to a significant drop in sales in January; followed by In the implementation of State V, the prices of products in the market generally rose. According to the requirements of the Ministry of Environmental Protection, all light-duty gasoline vehicles and heavy-duty diesel vehicles (passengers, buses, public transport, sanitation, and postal use) manufactured, imported, sold, and registered throughout the country must meet the requirements of the National Five Standards from January 1 this year; From July 1, this year, all heavy-duty diesel vehicles manufactured, imported, sold, and registered in the country must comply with the requirements of the National Five Standard; since January 1, 2018, all manufacturing, importing, selling, and registering Light diesel vehicles must meet the requirements of the National Five Standards. As the national five standards are to be enforced nationwide this year, and the passenger car models in the European light passenger market have been implemented since January 1 of this year. (The 11 eastern provinces and cities have advanced since April 1 last year.) For light gasoline vehicles, light-duty diesel passenger vehicles, and heavy-duty diesel vehicles (only public transport, sanitation, and postal use), five commercial vehicle companies have accelerated the switch of the five national models this year, and prices have generally risen. This also allows Many customers wait and see or even buy other alternative vehicles.
The third is the decline in exports, affecting the overall sales of the industry. As the main force of Chinaâ€™s European-wide wide-body light passenger exports, SAIC Datongâ€™s export performance for the first two months of this year was average, dropping by more than 80% year-on-year and a net decrease of 1,035 units. This net reduction accounted for a net reduction of the entire industry (1,258 vehicles). 82%.
Fourth, despite the recovery of the macroeconomic situation in the first quarter of this year, it is not as optimistic as expected, and many economists judge that the economic inflection point is likely to occur in March and April, which will inevitably affect the small and medium-sized enterprises that represent the vitality of the civil economy. The enthusiasm and purchasing power of micro-enterprise purchases of new cars and transfer cars have brought greater pressure on the European light passenger market.
Most companies decline Tuyeno's growth rate first
Due to the overall decline in the market, most companies have declined. For example, JDBâ€™s JMC Transit sold a total of 6,553 vehicles during the January-February period, a decrease of 7.9% from 7,113 vehicles in the same period of last year, and the share dropped by 0.2 percentage points to 41.5%; Nanjing Iveco remained basically the same, with 3,827 units sold since the beginning of the year, increasing its share. 1.8 percentage points to 24.3%. Although SAIC Datong maintained the top 3 in the industry, it dropped 19% year-on-year to 3,622 units. The main reason for the decline was due to the decline in exports â€“ January-February V80â€™s exports decreased by 87% year-on-year. The reduction of 1035 vehicles (Chase V80's domestic sales this year is a year-on-year increase). Jianghuai Xingrui and Dongfeng Yufeng also saw year-on-year declines, with cumulative sales of 400 vehicles and 253 vehicles in January-February, down 30% and 34% respectively year-on-year. 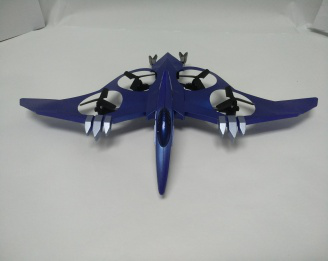 Function:
1.Unique design of the remote gives a feeling of high tech.
2.Full protection around blades.
3.Gravity sensor controlling with moves of gesture to control.